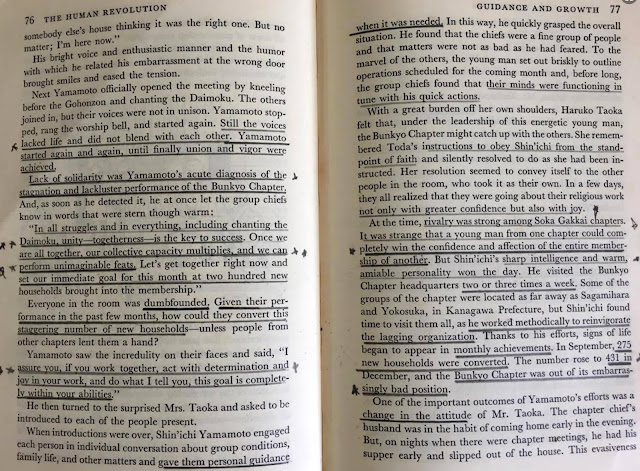 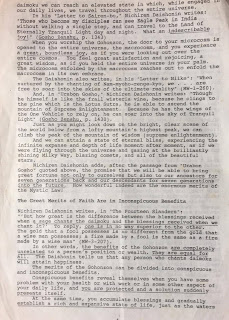 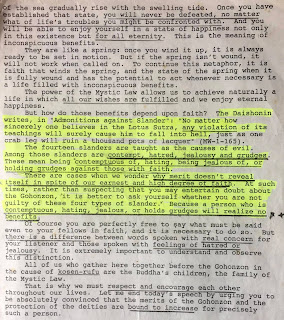 What happen when a person dies 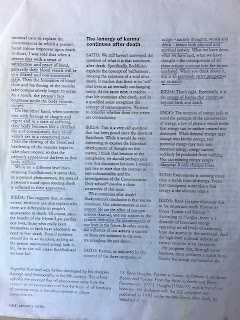 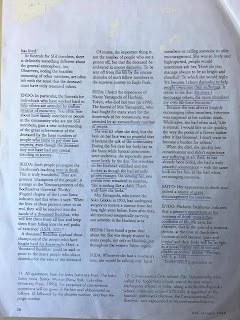 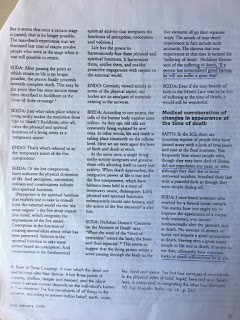 1)We pray for the temperature to 28 degree Centigrade, no wind because we are running around with strings of helium balloons, it will be disasters when it entangles, no rain.
All our prayers were answered as what we prayed for in the 2002 NDP

2)In the gosho, Hei no saemon want to execute Daishonin, but unsuccessful on that night a very bright object fell down from the sky, which Daishonin prayed to the buddhist gods for protections, which scared away the soldiers who are going to execute Daishonin.


So Daishonin was exiled to Sado island to left there to died, no persons who exiled there came back alive. Even with this very harsh condition Daishonin survived. But until now, no one has ever lost his life for the sake of the Lotus Sutra. I myself was born to become a poor priest, unable fully to repay the debt of gratitude I owe to my parents and to my country. Now I will present my severed head to the Lotus Sutra and share the blessings therefrom with my parents, and with my disciples and believers, just as I have promised you." Then the four Shijo brothers, holding on to my horse's reins, went with me to Tatsunokuchi at Koshigoe.
Finally we came to a place that I knew must be the site of my execution. Indeed, the soldiers stopped and began to mill around in excitement. Shijo Kingo, in tears, said, "These are your last moments." I replied, "How thoughtless you are! You should be delighted at this great fortune. Don't you remember your promise?" I had no sooner said this when a brilliant orb as bright as the moon burst forth from the direction of Enoshima, shooting across the sky from southeast to northwest. It was shortly before dawn and still too dark to see anyone's face, but the radiant object clearly illuminated everyone like bright moonlight. The executioner fell on his face, his eyes blinded. The soldiers were terrified and panic-stricken. Some ran off into the distance, some jumped from their horses and knelt on the ground, and others crouched down in their saddles. I called out, "Here, why do you shrink from this miserable prisoner? Come nearer! Come closer!" But no one would approach. "What if the dawn should break? You must hasten to execute me, for you will find it unbearable to do so after sunrise." I urged them on, but they made no response.

On the Buddha's Behaviour


The 3 gosho on the enlightenment of insentient being.

It is the power of the Lotus Sutra that makes it possible to infuse such paintings and statues with a "soul" or spiritual property. This was the realization of the Great Teacher T'ien-t'ai. In the case of living beings, this doctrine is known as attaining Buddhahood in one's present form; in the case of painted and wooden images, it is known as the enlightenment of plants and trees. This is why [the Great Teacher Chang-an] wrote, "There has never been anything to compare to the brightness and serenity of shikan-style meditation," and why [the Great Teacher Miao-lo] stated, "They are nevertheless shocked and harbor doubts when they hear for the first time the doctrine that insentient beings possess the Buddha nature."

This Buddha of yours, however, is a living Buddha. It differs in no respect from the wooden image of the Buddha made by King Udayana, or that fashioned by King Bimbisara. Surely Bonten, Taishaku, the deities of the sun and moon, and the Four Heavenly Kings will attend you as a shadow accompanies a body and protect you always. (This is the first point I wish to make.)
-
From the gosho: Consecrating an Image of Shakyamuni Buddha Made by Shijo Kingo
http://nichiren.info/gosho/ConsecratingImage
Posted by Henry Leong at 8:03 PM No comments: 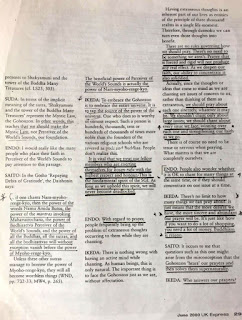 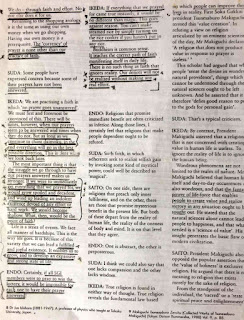 Posted by Henry Leong at 6:51 PM No comments: